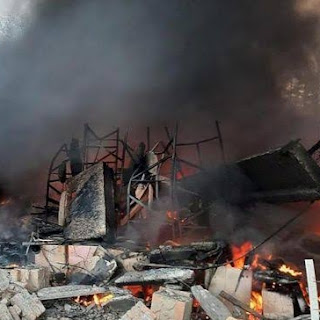 One of the direct consequences of the conflict in Ukraine could be the accession of NATO from Sweden and Finland, countries that have traditionally remained far from military alliances. For the first time since the Cold War, the two countries discussed membership. According to the Svenska Dagbladet (Svd) newspaper, Sweden will deliver the request at a NATO summit scheduled for June 29 and 30 in Madrid. Prime Minister Magdalena Andersson's goal, Svd wrote, was for the country to join the Alliance by June this year.
"There's a before and an after on February 24," said Swedish Prime Minister Andersson, who today met his Finnish counterpart Sanna Marin. In a joint press conference he explained that "there are topics that must be analyzed very carefully. We have to weigh all the pros and cons. At the same time, I don't see any reason to delay the decision. We will have an election in September and we will also have an election." should be able to focus on this.” Andersson stressed how important Finland's choice is in this regard for Sweden: "Finland's choice will of course affect us," he said. Finland's journey to apply for NATO membership is ongoing: a decision could be made in a few weeks. This was an unthinkable event until last year, as Secretary-General for Foreign Affairs Matti Anttonen had said in a press meeting at the Finnish embassy even two weeks ago.
This is a development that follows the change of opinion of most of the population after the start of the conflict between Russia and Ukraine. Preliminary talks are expected in a week. Meanwhile, Finnish Prime Minister Sanna Marin said today that she would not provide any calendars but she thought it would all happen fairly quickly: "in weeks, not months". Later, he highlighted the advantages of being a member of NATO, and not just a partner, as Finland is today. "There is no other way to get security guarantees other than in the context of mutual defense and deterrence, as guaranteed by Article 5 of NATO," he said.
"The difference between being a partner and a member is very clear and will continue to be." The Finnish parliament today received the White Paper on the changing security environment of the country following the attacks on neighboring Russia in Ukraine. "Without NATO membership, Finland does not enjoy guaranteed security, despite being an Alliance partner," reads the White Paper. Reports made in the aftermath of Russia's attack on Ukraine assert that only Alliance members benefit from the collective defense umbrella of the well-known Article 5 organization. NATO membership would provide "much greater" deterrence against attacks in Finland, it said.
Meanwhile, Russian military vehicles were spotted near the Finnish border. A video, verified by Sky News and published by international media, shows the movement of military equipment, including coastal defense systems, across the border between Russia and Finland, in a stark warning as the debate over NATO membership continues to grow. Nordic country. NATO has signaled that both countries will be welcomed with open arms. Russian Deputy Foreign Minister Maria Zakharova, speaking on Radio Sputnik, strongly stigmatized the possible entry of the two countries into the Atlantic Alliance, arguing that this move would only "serve the interests" of the United States.
Next Post Previous Post
Political,Sundries International,Ukraine-Russia