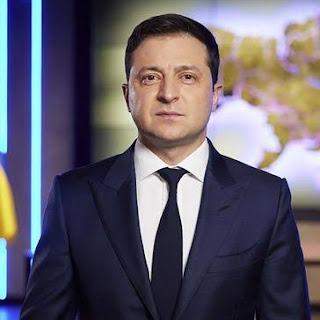 Ukrainian President Volodymyr Zelensky
As of Monday (07/03/22), Russia is still conducting military operations against Ukraine. As a result of this war, many state facilities were damaged, such as the Cheyyroboyl nuclear power plant, not to mention dozens of casualties. In this war, Ukraine is actually very disadvantaged, because Russia's military strength is far above Ukraine. Despite losing power, Ukrainian President Zelensky remained stubborn by still trying to fight the Russian military by deploying soldiers and civilians.
Zelensky's actions turned out to be condemned, where he was considered a comedian leader who did not find it difficult to sacrifice the lives of his citizens. On the other hand, many think that Zelensky only cares about his own needs, besides that there are many conspiracy theorists who say that Zelensky is a pawn from a western country that wants to pit Ukraine against Russia, which is then expected by Russia to make a mistake and get international sanctions. Assistance also flowed from NATO and the US in the form of food to weapons to fight Russia, after that Zelensky asked NATO countries to implement a no-fly zone against Russia, but in fact NATO refused the request. Zelensky also expressed his disappointment with NATO.
"Allied countries agreed at the meeting that NATO will not launch operations or deploy troops on Ukrainian territory, both in the air and land zones. We are not part of this conflict," Stoltenberg said at a press conference after the extraordinary meeting of NATO Foreign Ministers, Friday (4/3/2022). NATO itself does not want to trigger a wider war with Russia, especially Ukraine is not an official member of NATO for now. "Knowing that new attacks and casualties were unavoidable, NATO consciously took the decision not to close the skies over Ukraine. Everyone who will die from today on, will also die because of you," Zelenskyy was quoted as saying by ABC News, Saturday (5/5). /3). Here it is seen that Ukrainian President Zelensky is still swayed by all the policies he makes, especially his background as a comedian who has no political knowledge.
Reflecting on the problems above, it can be said that the steps taken by NATO can be said to be appropriate, by agreeing to Ukraine's request, then NATO is considered to be interfering in the affairs of Ukraine and Russia. Where Vladimir Putin previously threatened anyone not to interfere in his affairs that could lead to a world war.
Next Post Previous Post
Political,Ukraina