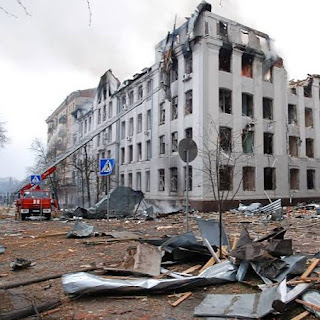 Another Ukrainian mayor was kidnapped by the Russian armed forces: he was the first citizen of the occupied city of Dniprorudne, in the southeastern part of the country, in the Zaporizhzhia region. The Kyiv Independent reports on it. The mayor of Dniprorudne, Yevhen Matveyev, is the second mayor to be kidnapped, after Melitopol, since the Russian invasion of Ukraine began. "War crimes are becoming systemic," said the governor of the Zaporizhzhia region Olexandr Starukh who broke the news on Facebook.
Russian elements have "kidnapped another Ukrainian mayor", Foreign Minister Dmitro Kuleba wrote on Twitter. "Today Russian war criminals kidnapped the democratically elected mayor of Ukraine, the leader of Dniprorudne, Yevhen Matveyev," wrote Russia's head of diplomacy. "Without receiving - he added - any local support, the occupiers turn to terrorism. I call on all countries and international organizations to stop Russian terrorism against Ukraine and democracy". Ivan Fedorov, the mayor of Melitopol, was kidnapped in the city center while he was distributing humanitarian aid to residents. The announcement was made on Telegram by an adviser to the Minister of the Interior Anton Gerashchenko. "During the kidnapping, they put a plastic bag on his head.
The enemy kept him in the city's crisis center, where he was tasked with supporting the citizens. There was a Ukrainian flag in Ivan Fedorov's office," he said. written Gerashchenko. In a video and on Twitter, President Zelensky called for Fedorov's "immediate release", also involving Scholz and Macron. "He is still alive, but they tortured him to express his support for Russia in a video," Zelensky said.
Meanwhile, the new pro-Russian mayor Galina Danilchenko took office in Melitopol, calling on the city's residents to "adapt to the new realities" and calling for a halt to demonstrations against the presence of Russian troops, stressing that there are still people in Melitopol who might try to destabilize the "situation". Danilchenko is a former member of the city council and said his "main task is to take all necessary measures to return the city to normal".
Next Post Previous Post
Political,Ukraine-Russia