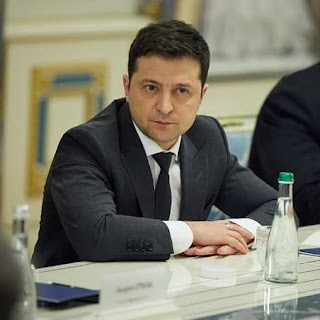 President of Ukraine: Volodymyr Zelensky
Is the assessment of Volodymyr Zelensky in an interview published by Corriere della Sera. "The use of nuclear weapons means the end for all parties involved, not just who pushes the button first," he stressed. "In my opinion, Putin's threat is a sign of weakness. He resorted to the threat of nuclear weapons because his plan didn't work. I believe Russia is well aware of the disastrous consequences of any attempt to use nuclear weapons”, the Ukrainian president continued. Putin's goal “is to divide and tear Europe apart, as he did with Ukraine.
Listen to what Russian propaganda has to say. They even preached from their church that other states should be conquered: Moldova, Georgia, the Baltic republics. In my opinion, Poland is also under threat. Indeed, the entire European continent is in danger, as long as Putin is allowed to attack a neighboring country,” Zelensky added. “We are currently the target of attacks reminiscent of the worst moments of the Second World War. That's why the sanctions must be more stringent”, explained Zelensky who added: “When it comes to sanctions, we must first block the export of gas and oil products.
Close ports all over the world to Russian ships. The carrier must refuse to send and receive goods to or from Russia ", he insisted, adding: "it is necessary" to exclude all Russian banks from the SWIFT system, and I mean all, without exception. ""This," Zelensky said, is a real action that must be taken. If you don't do it now, you will be forced to take much tougher action to protect the Baltic republics, Poland, Moldova, Georgia, and other countries that bordering Russia from possible invasion".
According to the Ukrainian president, "it is also very important that Western countries establish a humanitarian no-fly zone over Ukraine". Nearly 35,000 people have been displaced in the past 24 hours. "Meanwhile, the Ukrainian authorities are preparing six humanitarian corridors to allow new evacuations.
But he is not thinking about leaving." I live among my people ., is the best protection there is. As Russia prepared for an invasion, Putin could not have imagined that Ukraine would defend their country with such determination. Not just a few individuals, but entire nations. The Kremlin certainly didn't think that this, for us, would be the Great Patriotic War - as the Soviet Union did against Hitler. Putin's collaborators do not know Ukraine at all. But we are like that. With Ukraine by your side, you feel safe. This is a principle that will be a lesson to many in the West.”
Next Post Previous Post
Political,Sundries International,Ukraine-Russia