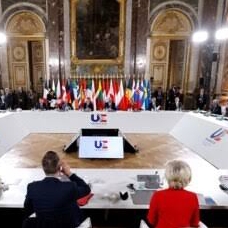 European Union leaders summit in Versailles
Defense, the great taboo of nations that emerged from the Second World War. European democracies, after the end of the Cold War, continued to enjoy protection from the United States, the Atlantic Alliance and NATO. Special conditions that allow many countries to gradually reduce arms investment. As EU foreign policy chief Josep Borell explained this week, European countries have contracted defense spending from 4 per cent of gross domestic product to 1.5 or 1 percent. Meanwhile, in the era of globalization, buying gas and oil from other countries is commonplace. Commercial or energy interdependence is the norm and self-sufficiency seems an outdated concept. All holds true until two unexpected natural disasters have occurred, in close proximity to each other.
In 2020, the pandemic will take two years to review the health plans of each European country, necessitating the application of common fighting tools, such as green permits and vaccinations for population categories, to the implementation of extraordinary economic measures shared by all. , such as the Recovery plan. A health emergency that broke out on March 24, 2022, the war in Ukraine due to Putin's attacks could not end. A jolt that forced European governments to rethink their defenses, in case of an imminent military threat, and to protect the common market from soaring prices. At Versallies, Europe is called to rethink itself: "This is the moment where we see that Putin's war is also a matter of the resilience of democracy," said Ursula von der Leyen.
In the palace, a symbol of the transalpine monarchy, work is being carried out in two areas: energy independence and defense. A topic that has been spoken about for years but never found fertile ground to take root. Now Germany is leading. Germany itself, defeated by the war, historically reluctant to establish itself as a military power, is now aiming to rearm. He did so with chancellor Olaf Scholz announcing a reversal of the times: the German government would invest 100 billion euros in weapons and bring spending to 2 percent of GDP. A signal has already been received by Denmark, which has expressed its
willingness to achieve the same goal.
For Macron: “The European Union will change more with war than with a pandemic” and encouraged by this spring, in the long dinner consumed last night in the Mirror Gallery, the French president put forward the idea of   “War recovery”, a roadmap that will draw Europe only between now and May.
Macron has proposed that new military spending, such as recovery plans after Covid-19, be financed by mutual debt. France's proposal for new Eurobonds has kept Germany and the Netherlands warm for now. However, apart from the documents that will emerge from the meeting of 27 European leaders, the sign of a reversal in a trend that has not been recorded since the Cold War era is quite significant. Military spending is again a central and necessary issue, even more so if Europe is asked to take initiatives other than those the Atlantic Alliance can take. At the same time, the so-called Versailles Declaration should think of a medium-term solution to rethinking a common energy policy. This process will involve cutting the umbilical cord in many EU countries with Russian oil.
Next Post Previous Post
Business,Sundries International