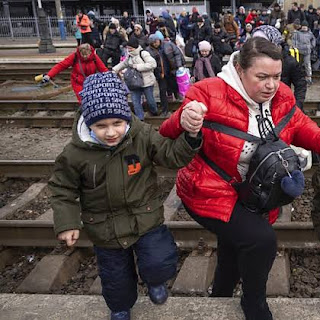 Ukrainian citizen, fled from Kiev
A second attempt to evacuate civilians from the city of Mariupol was stopped due to Russian bombing. This was reported by the adviser to the Ministry of Interior, Anton Gerashchenko, detailing that the planned evacuation along the designated humanitarian corridor had been disrupted due to several attacks allegedly underway. "There shouldn't be a 'green corridor' because only the sick Russian brain decides when to start shooting and at whom," Gerashchenko reported on Telegram.
The city of Mariupol, located in the south of the country, has been under siege for a week by troops from Moscow. The evacuation is scheduled to start at 12 noon local time (11.00 Italian time), while the ceasefire will take effect from 10.00 to 21.00 local time (9 AM to 20.00 Italian time). The mayor of Mariupol spoke of a "desperate situation" in the city, where electricity, water, heating have been missing for days and it is difficult to find medical supplies and other essential items.
Yesterday Russia and Ukraine agreed to a limited ceasefire around several cities, notably Mariupol and Volnovakha, to give humanitarian aid groups time to evacuate people trying to leave. But the truce has failed with rebound responsibility.
Next Post Previous Post
Political,Ukraina