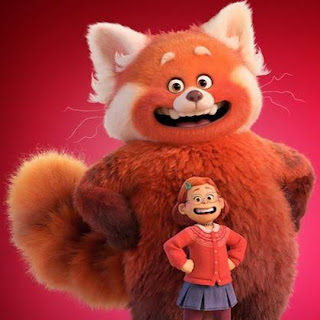 Turning Red Animated film
Turning Red is a collaboration between Walt Disney Pictures and Pixar Animation Studios, distributed by Walt Disney Studios Motion Pictures. The film Turning Red is directed by renowned director Domee Shi, who won the Best Animated Short Film award at the 2019 Academy Awards, and is a writer for storyboarding Toy Story 4 (2019), The Good Dinosaur (2015) and Inside Out (2015). Domee Shi also co-wrote the screenplay for Turning Red with Julia Cho.
This latest animated family film is produced by Lindsey Collins. Turning Red will feature Rosalie Chiang and Sandra Oh. Rosalie Chiang will voice Mei Lee's character and Sandra Oh will voice Ming Lee (May's mother). In addition, there is Orion Lee as Jin Lee (Mei's father), Wai Ching Ho as Mei's grandmother, and Ava Morse as Miriam (Mei's friend). There is also Maitreyi Ramakrishnan as Priya (May's friend), Hyein Park as Abby (May's friend), Tristan Allerick Chen as Tyler (May's classmate), and Addie Chandler as Devon. The Turning Red film will also play the song Nobody Like U, which was composed by Billie Eilish and performed by the boy band 4*Town. 4*Town is a boy band specially formed by Disney and Pixar for this animated film Turning Red. Turning Red is an animated film that tells the story of a 13-year-old teenager named Mei Lee (Rosalie Chiang) who is in a dilemma.
In this film, which is set in Toronto in the early 2002's, Mei is in a dilemma between being a child who makes her mother proud, or having fun in her youth with friends.
Mei's mother is a protective mother and always watches over Mei. It certainly became a very annoying reality for Mei, as a teenager. It didn't stop there, through the first trailer released on November 18, 2021, showing that May experienced a unique and strange event. One night when it rained heavily, Mei suddenly turned into a giant red panda. Mei was surprised to find her change when she looked in the mirror when she woke up from her sleep. This incident has been passed down from generation to generation in Mei's family, who is a family of Chinese descent.
Mei will turn into a panda whenever she feels overly emotional, including when she is in public and with her friends. Unfortunately his transformation into a red giant panda happens almost every time. Then, how does Mei overcome this unique incident? Will Mei be able to control her emotions and turn back into an ordinary teenager completely? Look forward to the Turning Red Animated Film which will premiere on Disney+ Hotstar on March 11, 2022.
Next Post Previous Post
Cartoon,Entertainment,Synopsis