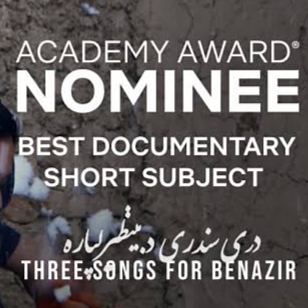 Synopsis : "Three Songs for Benazir"
Shaista Khan just got married. He lives with his wife, Benazir, in a less than decent home. Since evacuating with their tribe many years ago, they have been living in a refugee camp in Kabul which is actually less than adequate. They are always wary if one day their settlement becomes the target of a bomb or a shootout between the Afghan army, the Taliban, and the American troops. This sad story is told in the documentary entitled "Three Songs for Benazir".
Once upon a time, Shaista wanted to change his life for the better. Shaista's own education was limited. But he was eager to get a decent enough job. During this time he worked to make bricks. Sometimes he was invited to harvest opium. But actually he really wanted to join the Afghan national army. When he conveyed his plan to his father, his father asked him to forget and persuaded him to go harvesting the opium.
But Shaista didn't give up. He came to apply for the army. He is accepted, provided he fills out and returns the form. None of the elders in his village agreed with his plan. They don't want to be responsible or bear the burden of a pregnant Benazir.
Shaista was in a dilemma. This short documentary has been nominated for an Oscar 2022 in the short documentary category. It competed with four other films, "Audible", "The Queen of Basketball", "Lead Me Home", and "When We Were Bullies". With a duration of less than 30 minutes, Elizabeth Mirzaei and Gulistan Mirzaei provide viewers with an overview of Shaista's daily life with his deprived wife, as well as glimpses of their tribal life. Not much entertainment and facilities around them. Everything is limited. There is no school in their place. Residential buildings were perfunctory. Seen a woman using the radio to be able to listen to songs. He seemed happy to hear the songs. Even though they are lacking, the residents can still sing and dance. The youths were actually happy to hear the news that Shaista was going into the army.
He would be the first in their tribe to join the army. They make small celebrations by dancing to traditional music. But for the tribal elders, the way they already knew and proved safe was still better. They seem afraid of change. But the easy and safe way seems to be harvesting opium.
There is no conclusion that might match the expectations of the audience in this film. The story is left as it is because it is a documentary. The feel of helplessness and pessimism is thick in this film. So what do the three songs mean for Benazir? Apparently the husband likes to tease his wife by singing to her.
When he sings, the wife looks happy, she laughs while blushing. She covered her mouth with her hood. When he sings it shows how much Shaista really loves his wife. Only he is confused about how he can fight to improve the welfare of his small family in the midst of limitations and an environment that does not support him. This short documentary film previously won awards, including the Jury Award at the Full Frame Documentary Film Festival for the Best Short category and the Award of Excellence at the Yamagata International Documentary Film Festival.
Next Post Previous Post
Entertainment,Film,Synopsis