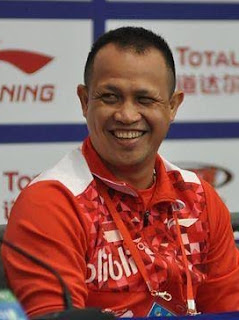 The coach from Indonesia, Rexy Mainaky, wants to help the Malaysian men's doubles pair, Aaron Chia/Soh Wooi Yik, break the title fast. Rexy Mainaky as the double coaching director of the Badminton Association of Malaysia (BAM) hopes that his team will be able to achieve success. Rexy Mainaky's big target since he returned to being an important person in BAM is to score the number one men's doubles pair. Malaysia's current best men's doubles pair is Aaron Chia/Soh Wooi Yik. They are ranked seventh. Chia/Soh's quality as a couple has been recognized. Including when facing representatives of Indonesia who are known to have qualified stock in the men's doubles. Marcus Fernaldi Gideon / Kevin Sanjaya Sukamuljo and Mohammad Ahsan / Hendra Setiawan they defeated on the way to winning the bronze medal at the 2020 Tokyo Olympics. Finalists for the 2018 Asian Games, Fajar Alfian/Muhammad Rian Ardianto, always die when they meet Chia/Soh.

Even so, Chia/Soh's achievements are not complete because they have never won an open tournament held by BWF. Three times to qualify for the finals in the last four years, Chia/Soh have always run aground and ended up on the second podium. In the 2018 German Open final, they were defeated by the British mainstay pair, Marcus Ellis/Chris Langridge. A year later Chia/Soh scored a high achievement when redeeming the final of the prestigious tournament, the 2019 All England Open. However, their hopes of embracing the title were met by Ahsan/Hendra. For your information, the condition of The Daddies at that time was actually not good because of an injury. Recently, Chia/Soh again postponed their dream of winning the title after being defeated by Lee Yang/Wang Chi-Lin in the final of the Thailand Open 2021. Rexy Mainaky revealed that the European tournament tour was an opportunity for his students to end the wait for an open tournament title. Chia/Soh are planned to take part in the 2022 German Open and 2022 All England Open this March. "This has been on my mind since arriving here late last year, and I have told Aaron-Wooi Yik as well," Rexy said, quoted by the New Straits Times. "They knew that it was time for them to start thinking about ways to end their wait for an open tournament title." "Winning an open tournament will increase their confidence after almost winning it on many occasions," continued the former Ricky Subagja tandem. Chia/Soh's biggest opportunity comes from the German Open 2022 where they are the second seed after Takuro Hoki/Yugo Kobayashi (Japan). Chia/Soh are in the pool and have the opportunity to meet the only representative of Indonesia, Fajar Alfian/Muhammad Rian Ardianto, in the semifinals.