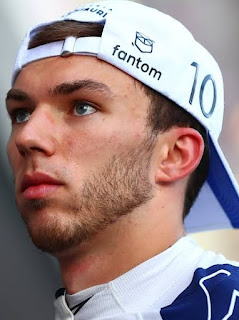 Pierre Gasly
Gasly apparently still wants to return to his seat at Red Bull Racing, which is now occupied by Max Verstappen and Sergio Perez. His chances were running low when the Austrian manufacturer announced the extension of Verstappen's contract. Meanwhile, the remaining slot is still in Perez's hands until the end of the season. Gasly is of course eyeing the seat for F1 2023. For this reason, he must perform brilliantly throughout this season in order to impress Die Roten Bullen officials and give him a way to return to the first team. Gasly said he would discuss the matter when he met Red Bull's adviser, Helmut Marko. "Helmut Marko has made it clear, so it's no secret that I still have one year left on my contract after this season. Then, it's clear whether we will step up to Red Bull or not," he said as quoted by Motorsport.com. "What happened next, it's too early to talk about that. I want to focus on the season now, hopefully it goes as well as possible," added the French rider. "However, it's clear that I want to drive a fast car so I can fight for the win. That's what's most important to me.
I want to win a lot of Formula 1 races and I need a car that will allow me to do that. We will discuss with Helmut when the time is right," he continued.
After being sacked by Red Bull in the middle of the 2019 season, Pierre Gasly moved to Toro Rosso (now AlphaTauri). In that team, the rider managed to get on the podium three times, one of which was a victory at the 2020 Italian GP. The 26-year-old racer admitted that he did not want to burden himself because it would make his appearance worse. “No, I know I have to do the same as I have been doing for years. I have to keep going, push the team forward and guide them in the right direction."
"I'm really excited about this situation. I wish we had a fast car. That's the main thing now," he added. Gasly himself was already preparing his way back to Red Bull. Throughout the winter, Yuki Tsunoda's teammate did various physical exercises and studied his new car, the AlphaTauri AT03. The move was necessary because this season's championship held a total of 23 races.
Next Post Previous Post
Formula 1,Sport