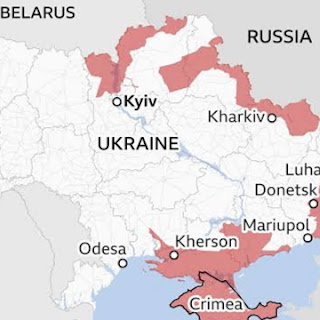 The current conflict between Russia and Ukraine will not only affect the stability of the two countries, but also global stability in various sectors, such as economic, social, political, and even global security. This problem is related to contemporary global issues, which are part of global defense and security issues. This conflict arose because Ukraine wanted to join NATO (North Atlantic Traety Organization), which made Russia quite worried because it considered that if Ukraine joined NATO, it would mean Russia would be surrounded from all directions by its mortal enemies, namely western countries. . Ukraine-Russia will not trigger a third world war. What is happening in Ukraine is just a bluff of Russia and Russia itself does not want war.

Why not trigger a third world war?

• First, the possibility of a third world war will occur if most of the countries in the world or at least some of the powerful countries (America, Russia, China, Britain, France) decide to go to war with each other. As long as there is no war with each other between the great powers, the chances of a third world war happening are few and almost impossible just because Russia decided to invade Ukraine. Moreover, America and Britain have said that they will not send troops to Ukraine to fight Russia, but they will only help Ukraine by sending weapons. In addition, in the heat of the moment because Russia mobilized its troops to the Ukrainian border, NATO countries did not react by sending more troops to Ukraine. Although there was military assistance with sending military personnel to Ukraine, the numbers could not be counted for a total war.

• Secondly, and what about NATO? Will they help Ukraine if it goes to war with Russia? Of course NATO does not want to defend Ukraine. The important point here is that Ukraine is not a member of NATO. In addition, NATO also does not want to risk a widespread escalation of war with Russia. After all, Russia is the country with the second strongest military power and has nuclear weapons. What the West has done maximally is economic sanctions and slowly destabilizing Russia until it becomes a weak state. Ukraine is not stupid to go to war with a much stronger country. Russia knows very well how to maintain the security and resilience of its country. That's why they inevitably have to take over Ukraine's border with Russia. Then the NATO countries did not immediately see the lust for war. For example, France, France took the initiative to mediate this conflict to reduce tensions. And as we see, the tension is dropping. Russia is pulling some of its troops away from the border. So is Germany. Germany only donated helmets and medical equipment to Ukraine. Germany's business with Russia is too big to be canceled in favor of Ukraine, especially since there are plans to build a Russian-German gas pipeline through the North Sea. Germany will certainly consider this before deciding to support Ukraine. Plans for the construction of a German-Russian gas pipeline.

• Thirdly, Russia is one of the countries that has nuclear weapons with the most nuclear warheads, and nuclear war could be the last option if Russia and Putin are already feeling very pressured. From this we can see that the West and NATO are very careful not to start declaring war first, unless they are attacked first. Possession of nuclear weapons is precisely what will prevent the third world war from happening in the near future. This is because nuclear weapons are an attractive bargaining power if a country wants to go to war with nuclear-weapon states.

The conflict between Russia and Ukraine is proof that this realism paradigm can still work in today's world. In the realism paradigm, one stream is known, namely defensive structural realism or defensive realism which assumes that the state focuses on maintaining its national security so that the state becomes security maximizers. According to defensive realism, large countries tend to try to balance the strength of their opposing countries and weak countries usually tend to make alliances. This is what Ukraine is doing. Ukraine is seeking to improve its balance of power by seeking entry into NATO. Meanwhile, what Russia is doing is a form of defense because if Ukraine joins NATO, Russia will be surrounded by its mortal enemy and of course it is feared that it will disrupt Russia's security stability and could be a threat to the security of its people. This is because Ukraine could be an access and entry point for NATO to attack Russia because of its possible geography. What the West is reporting is sometimes just media propaganda. Putin has no intention of taking Ukraine. He invaded Ukraine on the grounds of people's security. In Russia's position, if for example Ukraine joins NATO, then its country's security is in danger. Russia just wants Ukraine not to join NATO, and asks NATO to reject Ukraine. Putin said his military only wanted to protect civilians in the Donbas region who demanded independence from Ukraine. Putin accused the Ukrainian army of being the first to commit human rights violations and genocide against ethnic minorities in the Donbas. What is happening in eastern Ukraine in the Donbas area is a separatist movement of ethnic Russians who want to secede from Ukraine. What happened was that from the Ukrainian point of view they were fighting separatism, while from the Russian perspective they were protecting ethnic Russians and maintaining Russian influence in Ukraine.

One of the concepts proposed by the Liberalism perspective is the 'Democratic Peace Theory' which says that countries that adhere to democracy will not engage in armed conflicts or go to war with other democratic countries so that peaceful conditions will be created between democratic countries. justification or criticism of the relevance of this theory in the practice of international relations because these two countries are democracies and as it is known that Russia is one of the federal democracies after the collapse of Soviet communism. Russia's actions against Ukraine have caused Western countries and the European Union to react by condemning one of the ways by imposing economic sanctions on Russia -- for example the United States (US) which froze the assets of several major Russian banks and cut imports of technology goods from Russia, and urged the two countries to take the mediation route. Threats of economic sanctions and embargoes to encourage Russia to stop its aggression have little effect because Russia is a strong region so they can still withstand the embargo. The proof is when Russia received an embargo due to its 2014 invasion of Crimea. Russia actually created a De-Dollarization policy, namely an effort to reduce the use and dependence on the dollar. This shows that the Russian economy has indeed proven its resilience.

In addition, the European Union's efforts to reduce Russia's influence in the region will actually harm EU countries. This is because European Energy and Oil supplies depend on Russia, which has a high level of dependence which supplies around 40% of the EU's gas needs. The European Union's efforts to impose economic sanctions and efforts to reduce the level of economic dependence on Russia arguably cannot suppress Russia's aggressiveness because economic sanctions are also detrimental to the sanctioning country.