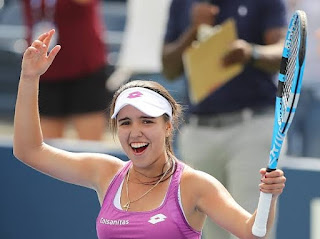 Maria Camila Osorio Serrano
Fifth seed Osorio Serrano reached the third final of his career, all three in the last 12 months, after beating Spaniard Nuria Parrizas Diaz 6-4, 6-4 in the semifinals of the Monterrey Open. The Colombian tennis player won over sixth seed Parrizas Diaz in 1 hour 29 minutes. Now he is one win away from the second title of his career after last season he won in Bogota. He was also runner up at Tenerife last season.
Entering the semifinals, the fifth seed went through a tough quarter-final against first-seeded Elina Svitolina but she wasn't fazed and is now 2-0 up against Parrizas Diaz in the semifinals of a WTA tournament for the first time in her career. The Colombian also beat the Spaniard in the final match of last season's Wimbledon qualifiers. With the results at the Monterrey Open this season, Osorio Serrani who is currently ranked 44th in the world is predicted to break into the top 40 rankings on Monday (7/3).
After being broken in the opening game of the first set, the Colombian took control of the first set and won it by converting a sixth break point opportunity at 5-4. Both players hit 11 winners each in the first set, but Parrizas Diaz made four more unforced errors in that set.
The first four games of the second set were won by the serving player, but the fifth seed took the lead by getting her first break of the set before leading 5-3. Parrizas Diaz still showed tenacity by winning the next game. But in the end the Colombian claimed victory by using another break on her match point opportunity.
Waiting for Osorio Serrano in the Monterrey Open final was the second seed, Annie Fernandez, who easily knocked out Brazilian tennis player Beatriz Haddad Maia 6-1, 6-4 in 1 hour 12 minutes. With this win, Canadian Annie Fernandez has won her last nine matches at the Monterrey Open and is 11-1 in Monterrey overall. World number 21 Annie Fernandez also bagged 4-0 in the semifinals and is now eyeing a second career title.
Next Post Previous Post
Sport,Tennis