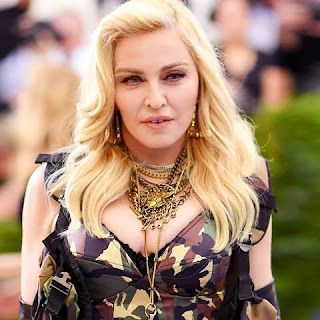 Madonna's sexy singer
Singer Madonna, at the age of 63, has not stopped working. Currently, Madonna is gearing up to release a remix of her 1998 hit Frozen, which features Nigerian singer Fireboy DML. Quoted from the Daily mail page, she doesn't want to look ordinary, for the music clip, Madonna at her age, who is no longer young, still wants to look sexy. Her appearance for her latest music clip, recently posted by Madonna to her Instagram account. On March 2, 2022, Madonna shared photos and videos wearing sexy outfits. Madonna appeared seductive in the form of a dark boomerang clip showing the singer with the birth name Madonna Louise Ciccone performing some dance moves wearing a corset.
The Like A Virgin star's face is hidden behind her long blonde hair, and the visuals are rendered in dark blue. She then toyed with the black-and-white image in a kicking pose in oversized platform boots, paired with a black leather corset and fishnet stockings. And with an added touch of style, Material Girl is outfitted with an assortment of bracelet jewelry and a black glove on her left hand.
Not only wearing a black leather corset, Madonna is also showing off sexy wearing a black lace bustier in a black-and-white photo of herself sitting on the edge of the bed. He also added futuristic looking sunglasses and some crosses for the overall look. Madonna's appearance is similar to her image in the 1980s and 90s. Throughout the day Madonna shared several photos of herself with the same all-black theme, and photos of herself posing with Fireboy DML. Fireboy DML is a singer from Nigeria, his debut studio album, Laughter, Tears and Goosebumps - was released in 2019 and features his breakthrough song Jealous.
Not only on her Instagram feed, Madonna also shared photos on her Instagram Story, 'Fitting Hell Frozen Remix,' she said in a number of Instagram Stories photos, including one taken from her stomach to the platform's boots. As is well known, the original version of Frozen, written by Madonna with American songwriter Patrick Leonard, appears on the pop superstar's seventh studio album, Ray Of Light (1998). Previously, Madonna herself considered Ray Of Light the most satisfying evolution of her career. Just last May, Madonna collaborated with producer Sickick on the Frozen remix, which is said to be a new loop mix of the song. As well as sharing photos and videos for the new Frozen series of clips, she's also shared the new cover of Billboard magazine, the colorful NFT version of Madonna, which is essentially a digital asset. "So excited to be on the cover of @billboard magazine!! My first NFT was created by a Women-led organization called World of Women for Women's History Month!!!," she wrote in the caption. This image will be on the cover of Billboard Magazine's Women's History Month print issue.
In addition, they will print this image as a unique digital collection NFT! Proceeds from the Auction will go to artist Yam Karkai, and City of Joy!! Organizations I support for Women who have been victims of Gender Violence in the Republic of the Congo for years!" He ended by writing, "Finally, artist Yam Karkai will be making a second 'cosmic twin' of the artwork, and printing a second NFT to give to me personally. Grateful to be a part of this for so many reasons!
Next Post Previous Post
Bands and Music,Entertainment