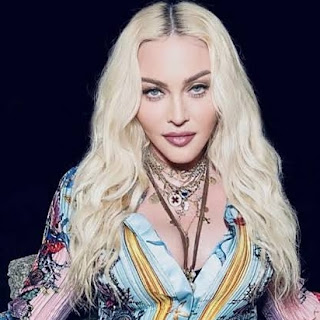 Madonna
Madonna looks so young in the Frozen remix music video. The song is Madonna's hit song which was released in 1998. This time, Madonna took Fireboy DML and producer Sickick in her latest video. In the new music video, Madonna is wearing a sexy and revealing all black outfit. The 63-year-old woman's hair is blonde and looks straightened.
Madonna completed her look with a large silver cross necklace above her chest. She also wore other glamorous accessories such as necklaces and bracelets. Madonna's appearance in the remix and the original Frozen video is very different. In the music video released in 1998, Madonna carries a gothic theme. Her hair is black and she is dressed in the same color. The Frozen remix music video by Madonna is two minutes 47 seconds long.
In addition to featuring Madonna, Fireboy DML also appeared. Madonna's lyrics have no new lyrics. Meanwhile, Fireboy added his own lyrics. Previously, Madonna had been promoting the release of the Frozen remix for a while and shared some photos of her perfect face. He did not hesitate to pose sensually with Fireboy DML in his promotions. On the previous occasion, Madonna actually looked different when she left the Harry Bar restaurant in Mayfair, London, England in the early hours of Saturday, March 5, 2022 local time with Rocco Ritchie, her eldest son. Madonna's face looks very different because it has wrinkles, sagging, and signs of aging. In fact, Madonna often shows her perfect photos like she is not aging on her social media accounts.
Even so, Madonna still shows an eccentric fashion style. With shorts, black blazer, boots, graffiti 'loveable rebel' bag from Commes des Garconsm and sunglasses. But unfortunately, Madonna flooded with blasphemy because her face looks different, difficult to recognize, and older. During the release of the Frozen remix music video, Madonna decided to remain silent and did not respond to the changes that occurred in her face.
Next Post Previous Post
Entertainment,Hollywood artist