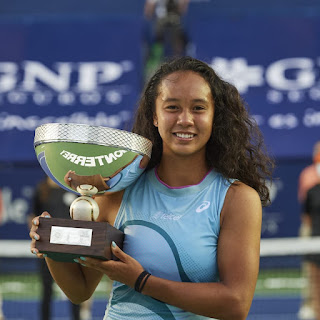 Leylah Annie Fernandez
The Canadian tennis player struggled to secure five match points before finally defeating Colombia's Maria Camila Osorio Serrano 6-7, 6-4, 7-6 in the final of the Monterrey Open. The second seed saved one match point at 4-5 in the third set and another four at 5-6 before entering the decider tiebreaker. It took him 2 hours 52 minutes to overcome the tenacity of fifth seed Osorio Serrano.
"This game is a very, very tough match, not only physically, but mentally," admits Annie Fernandez. "Camila, she's a very tough player to play against. He is very creative, he attacks with slices, high balls, very unpredictable." "I feel very happy to be able to go through a tough moment like that and fight to find a way out. And Camila, I hope we will have more finals like that, because without her, I think this tournament, this final would not be special." The 2022 Monterrey Open final will be the first professional meeting between 19-year-old Annie Fernandez and 20-year-old Osorio Serrano, but they have often met in junior tournaments, having met three times at Grand Slams. The 19-year-old won their meetings at the 2018 and 2019 French Open junior categories, while the 20-year-old won their meetings at the 2018 US Open.
The match this time was very competitive after the world number 21 had to give his best before defending his Monterrey Open title and winning his second career title. Thanks to that win, he is now 12-1 in the tournament and has won his last ten matches in Monterrey.
In addition, Annie Fernandez is now 2-2 in the final of the WTA tournament with both titles she won in Monterrey and she also played in her third final in Mexico, namely in Acapulco in the 2020 season. Her fourth final occurred at the US Open in 2021 and lost to Emma Raducanu. While world number 44 Osorio Serrano is now 1-2 in the final, but the result of the Monterrey Open will see him break into the top 40 on Monday (7/3).
Next Post Previous Post
Sport,Tennis