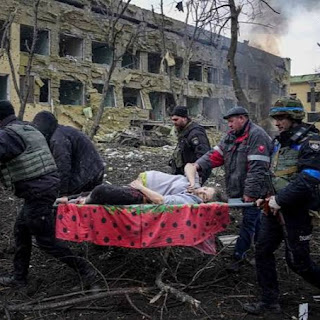 1,200 people killed in Mariupol
Several cities experienced Russian attacks. In Severodonetsk, in the east, 10 people were killed in shootings, according to the head of the Lugansk administrative region. And in Yitomir, west of Kiev, nine people were killed by aerial bombardment. In the same capital city, alarm sirens are activated four times at night. And the exodus of Ukrainian citizens to neighboring countries continues. The chief UN High Commissioner for Refugees (Acnur), Filippo Grandi, estimates between "2.1 million and 2.2 million people."
"Poland alone receives 150,000 a day," he said. A total of 1,207 Mariupol civilians have died since the start, nine days ago, of the Russian siege of this strategic Ukrainian port, the mayor said on Wednesday. "Nine days. Nine days of blockade of Mariúpol (...). Nine days -1,207 civilians killed. Nine days of genocide of the civilian population," the mayor's office said in a message on Telegram, along with a video with a statement by the mayor, hours after the Russian bombing. destroy a children's hospital in the city. The power supply of the Chernobyl power plant and its security equipment was "completely" cut off due to the actions of the Russian military, reports Ukrainian operator Ukrenergo.
The Chernobyl nuclear power plant, the origin of the worst civilian nuclear disaster in 1986, "has been completely cut off from the power grid due to the military actions of the Russian invaders. The place no longer has power supply," the operator says on its website. page. From Facebook.
"There is no possibility of rebuilding the line" as the attack is ongoing, the operator said. The Chernobyl plant, located in the exclusion zone, includes a decommissioned reactor and a radioactive waste facility. The United Nations' Vienna-based International Atomic Energy Agency (IAEA) did not immediately react.
Russia and Ukraine agreed to respect a ceasefire that would allow the evacuation of civilians from several areas devastated by the bombing, while increasing international sanctions against Moscow, which accuses the United States of waging "economic war". After 14 days of the invasion, during which there have been hundreds of deaths and two million exiles, the spokeswoman for the Russian Foreign Ministry, Maria Zajárova, acknowledged "progress" in negotiations to "end as soon as possible the senseless bloodshed and resistance of the Ukrainian forces".
This corridor will go from Energodar to Zaporizhia (south), from Izium to Lozova (east) and from Sumy to Polatava (northeast). Routes to Kiev will also be opened from penalized areas located northwest of the capital such as Bucha, Irpin or Gostomel. Previous efforts to protect civilians caught in heavy fighting have been thwarted or disrupted by breaches of agreed ceasefires.
Next Post Previous Post
Political,Sundries International