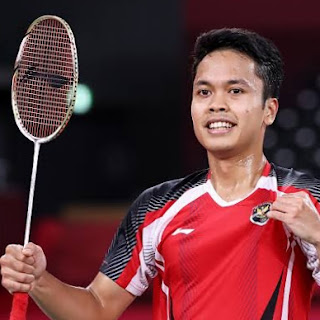 Anthony Ginting
The first round match of the German Open Super 300 badminton tournament, started at Westenergie Sporthalle, Mulheim. Mixed doubles Adnan Maulana/Mychelle Chyristine Bandaso, the first Indonesian representative to win at the German Open today. Adnan/Mychelle faced fierce resistance from Indian doubles, Dhruv Kapila/Gayatri Gopichand Pullela. Both pairs competed for points at the beginning of the first game. The condition of the score was balanced 4-4 and 8-8. Dhruv / Gayatri had won at 14-13.
However, Adnan/Mychelle were able to equalize the score, and then took the lead, eventually winning with a score of 21-19. In the second game, the pairs of Indonesia and India followed each other with points. The last balanced position is at 16-16. After that Adnan/Mychelle could control the game, and made sure to win with a score of 21-19. Adnan Maulana/Mychelle Bandaso in the next round will face the Danish double, Mikkel Mikkelsen/Rikke Soby. In the first round, Mikkelsen/Soby defeated the host's mixed doubles champion, Mark Lamsfuss/Isabel Lohau, with a score of 24-22, 21-13. In the men's singles match, Indonesia's mainstay player, Anthony Ginting, won over the Spanish representative, Pablo Abian.
Ginting dominated the first game, and won with a score of 21-14. However, Abian gave great resistance to Ginting in the second game. Pablo Abian had time to make game points 20-18. But Scissors remained calm, and could equalize the score. Anthony Ginting finally won the second game with a score of 23-21. Anthony Ginting in the second round match faced a tough opponent from India, Lakhsya Sen. Lakhsya Sen's achievements are brilliant. He just won the India Open two months ago, and was a third-placed red at the World Championships in December 2022. The surprise happened in the men's doubles number. The 2017 world champions from China, Liu Cheng/Zhang Nan, were defeated by representatives of Thailand, Supak Jomkoh/Kittinupong Kedren. Jomkoh/Kedren beat Liu Cheng/Zhang Nan with a score of 21-19, 22-19. In the second round, Jomkoh/Kedren will face the 5th seed from Denmark, Kim Astrup/Anders Skaarup Rasmussen.
Next Post Previous Post
Badminton,Sport