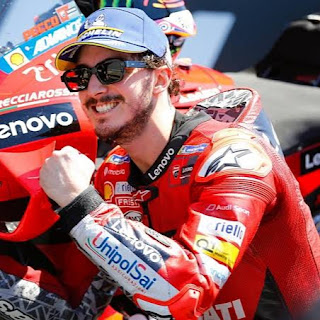 Francesco Bagnaia
For your information, the 2022 Mandalika MotoGP will take place at the Mandalika Circuit, Central Lombok, West Nusa Tenggara (NTB), Indonesia. The Mandalika 2022 MotoGP series will start from 18 to 20 March. The circuit which has a length of 4.3 kilometers and also 17 corners will witness the battle of world-class riders in 2022. The first for Mandalika and the second round of the season. Finally, Indonesia again held the grand event of this most prestigious motorcycle race. Although in the pre-season test, there were complaints from the drivers about this circuit but Mandalika is still a promising circuit for the drivers. It is hoped that the hard work of the Mandalika Grand Prix Association (MGPA) which has re-paved the Mandalika Circuit at several problematic points can guarantee that the race will be safe for the racers.
Problems such as dirty asphalt and gravel which the racers say are sharp as knives can be fixed before the race later. Everything will be safe, everything is satisfied that is the hope. The Pertamina Grand Prix of Indonesia is expected to help the national economic recovery, increase tourism potential, and advance the motorsports ecosystem in Indonesia. Even unmitigated, for the sake of the Mandalika race, the government has issued a circular so that all domestic trips no longer need an antigen test or PCR when the vaccine is complete. The Mandalika Circuit is a new circuit for all the drivers even though last February there was a pre-season test here, but for this official race this is the first time. Because it will be interesting to see which of these MotoGP riders will be the first to conquer Mandalika.
Enea Bastianini's slick appearance is something positive for MotoGP. He is also a favorite because apart from being able to beat Gresini Racing Ducati, he is also a student of Valentino Rossi in his academy.
In his first appearance at Losail yesterday, Pecco did fall. But that's because he was pushing the motor too much. Therefore, the fault is not solely with Pecco. Ducati alone has admitted wrong and apologized to him. If the Italian team can make quick improvements, we will surely see Pecco who is fast and agile like last season in the second half. As reported by online media Bola, after yesterday's race Pecco was very disappointed because the motor's performance did not match his expectations. Before the race week started, Ducati became the center of attention as Bagnaia and Jack Miller suddenly used the Desmosedici 'GP22.1' engine they tested in the Jerez test in November 2021. This decision was taken after the 'GP22.2' engine tested at the Sepang and Mandalika tests in February was judged not to have a good power distribution. Despite having switched back to the Desmosedici GP22.1, Pecco and Miller still had problems. For the Ducati motorcycle from Parmac Racing, the same complaint came from Jorge Martinz.
Miller said that the motor he was riding seemed to be missing, especially in the electronics. Bagnaia also stated that he had felt the odd way of working with Ducati since the post-season test at Jerez last year. According to him, the bike has undergone too many changes, even until the Mandalika test was held. He was even more irritated because the task of developing the motorbike was not finished when he arrived in Qatar. In the race in Qatar, it looks like Ducati is in trouble. There is no visible superiority of Ducati, which is usually very good on the straight track. Instead, it looks like Ducati is having a hard time catching up with Honda, Zuzuki, and KTM. Luckily Bastianini was able to save Ducati's face. In Mandalika, hopefully Pecco will return to his best performance with the support of a powerful engine from Ducati as usual. The good news is that the complaints of Valentino Rossi's students at the VR46 Riders Academy have also been reported to the General Manager of Ducati Corse, Gigi Dall'Igna. He also admitted that he refused to change the configuration of his motorbike again ahead of the Indonesian MotoGP at the Mandalika Circuit on March 18-20.
Next Post Previous Post
MotoGP,Sport