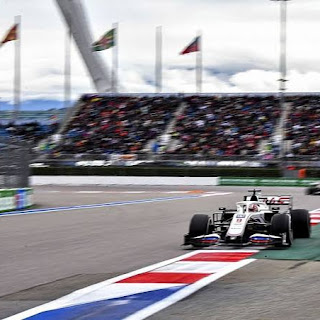 Sports : Formula 1
The promoter of the Formula 1 World Championship has terminated its contract with its broadcaster in Russia and has blocked access to its official network which broadcasts online in the country, a source close to the case confirmed to AFP.
The termination of the contract between Formula One and broadcaster Match TV and the blocking of F1TV is a further step in the symbolic sanctions imposed on Russia since the invasion of Ukraine on February 24, and joins the cancellation of the Grand Prix scheduled for September at the Sochi Circuit and the exclusion of Nikita Mazepin as driver.
Haas team. In football, championships in France and England have also been canceled in Russia. On the first day of the second pre-season test this Thursday in Bahrain, Germany's Sebastian Vettel (Aston Martin) jumped onto the track wearing a helmet with the colors of the Ukrainian flag, doves and the messages "Peace and love" ( Paz y Amor) and "No war" ( No to war), in addition to the lyrics to the song 'Imagine' by John Lennon.
At the initiative of the Grand Prix Drivers' Association (GPDA), 18 F1 drivers (except Britain's Lewis Hamilton and Denmark's Kevin Magnussen) posed behind a Ukrainian flag and a banner reading "No war". " at the Sakhir circuit on Wednesday. They all also wore T-shirts with the same 'No to war' message. Hamilton, for his part, expresses himself on his Instagram account. "I am wholeheartedly with the brave people of Ukraine who resolutely defend their values   of freedom and peace," he wrote before launching a call of support for a group of British NGOs working in Ukraine.
Next Post Previous Post
Formula 1,Sport