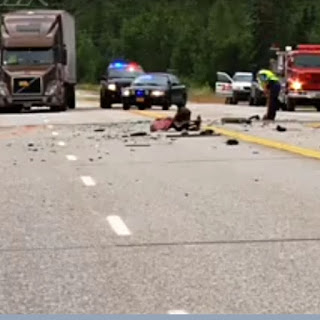 Florida : Police are investigating double homicide
A husband and wife on a motorbike were found with their throats slit and stabbed on the Daytona Beach road, a case that city police chief Jakari Young called "one of the most violent and gruesome" he has seen in his 20-year police career. Young reported that the victims were found Sunday at 700 Wild Olive blk near Riverview, on Daytona Beach, on Florida's east coast, and that they were "violently attacked between 1:00 and 2:00 a.m.." “Police are investigating a double homicide , Both victims suffered multiple stab wounds and lacerations.
The suspect's information is limited to a male of an unknown race who is wearing white or light-colored pants and may be carrying a backpack." The victims, whose identities have not been disclosed by authorities, were found by the side of the road, near the area where Motorcycle Week was being held on Daytona Beach, an event considered one of the largest of its kind at the level. a national event attended by half a million motorcycle riders to take part in circuit and motocross races at the International Speedway.
Police said that when they saw the couple on the street, they thought it was a hit-and-run and the person had fled, but later they observed that the victims had their throats slit. “This is probably one of the most violent and horrific incidents I have witnessed in 20 years. We can't rule out that this could be completely random, but if it was, the person responsible must have gone mad," Young told WESH 2. Police said they don't believe it was a robbery.
Next Post Previous Post
Crime,Sundries International