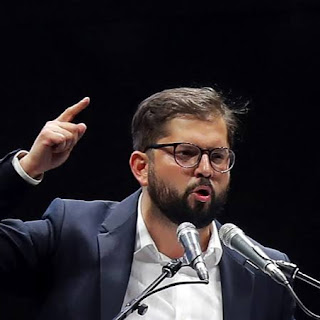 Chilean President Gabriel Boric
The president of Peru, the Dominican Republic and the King of Spain, Felipe VI, were among the first authorities to arrive in Chile this Thursday for the inauguration of president Gabriel Boric, who received a Pokémon plush toy from the Japanese delegation, sympathetic notes today Boric, who at 36 will become Chile's youngest president, received various guests at the Municipality of Santiago, in the heart of the capital. In addition to meeting with Felipe VI, the president of Dominica, Luis Abinader, and the President of Peru, Pedro Castillo; he also did it with Ecuador's Guillermo Laso and Paraguay's Mario Abdo. He also received the Prime Minister of Curaao, Gilmar Pisas; from Haiti, Ariel Henry; from Guyana, Mark Phillips; and envoys from the governments of Mexico, Brazil, Ireland, Japan, Morocco, Palestine, Honduras, and the United States.
Argentina's President, Alberto Fernández, and his Bolivian counterpart, Luis Arce, are due to arrive on Friday. "Dear @gabrielboric, may this new stage in Chile consolidate the integration efforts that must be carried out among our brothers and sisters. The people expect major social reforms along with continued investment.
Let us realize the development of this great homeland," wrote Castillo . on social networks, along with a photo with Boric, to whom he gave the figure of a horse. However, it was Japan's Foreign Minister, Kiyoshi Odawara, who left a good note by giving Boric a stuffed animal from the popular animated series Pokémon, after learning that the previous president-elect had posted on his social network that his favorite character was Squirtle, a type of blue turtle. The surprise and pleasure that the gift gave him was not hidden even by the mask and he reiterated it on Twitter, where he published a video receiving the gift with the sentence: "Thanks to Japan's Minister of State for Foreign Affairs, Kiyoshi Odawara, for this Squirrel!" Throughout the day, the outgoing president, the conservative Sebastián Piñera, also received an official delegation at the presidential palace of La Moneda.
On Friday, Piñera and Boric will carry out a change of command in the coastal city of Valparaíso, about 120 km from Santiago, at the headquarters of the Congress. For the ceremony, in addition to official and foreign dignitaries, Boric invited such dignitaries as Brazil's former president Dilma Rousseff, British Labor MP Jeremy Corbyn, Argentinean president Grandma Plaza de Mayo of Estela de Carlotto, and Nicaraguan writer and government opponent Daniel Ortega, Gioconda Belli.
Next Post Previous Post
Political,Sundries International