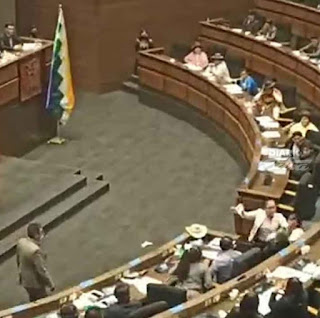 Bolivian government and opposition
Bolivia's pro-government and opposition legislators pushed each other during the discussion of the controversial bill in parliament and the session had to be suspended, authorities reported. Among the shouts and accusations, a senator from the ruling Movement for Socialism (MAS) and another from the Citizens' Community, the main opposition party, began pushing each other until the latter fell to the ground.
There was a similar altercation a few minutes later, when a dozen opposition legislators occupied the center of the room with banners against the bill for the election of the Ombudsman. "The People's Ombudsman, not the MAS Ombudsman," reads the poster.
The opposition has questioned how candidates will be selected if the project is successful, accusing the ruling party of being able to screen its own candidates at election time using regulations. On its part, the ruling party supports the initiative and has enough votes to approve it. At the whistle, lawmakers from the centrist Comunidad Ciudadana surrounded the vice president, left-leaning David Choquehuanca, as he addressed Congress. A similar episode occurred in June 2021, when two Bolivian congressmen from the ruling and opposition parties exchanged kicks and punches during a parliamentary session.
Next Post Previous Post
Political,Sundries International