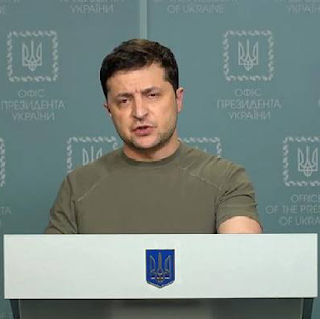 Ukrainian President Zekensky
“We appeal to the European Union for Ukraine's immediate accession with new special procedures. We thank our partners for being with us, but our dream is to be with all Europeans and, above all, their equal. ," Zelensky said. According to the Ukrainian president, "Europe understands that our soldiers are fighting for our country, and therefore for the whole of Europe, for peace, for all EU countries, for the lives of children, for equality, democracy ". But Brussels holds back: "Today is not on the agenda, believe me.
We have to work on more practical things. Membership is something that will take, in any case, years and we will have to provide answers for several years." future. hours. Not. for the next few years, but for the next few hours". This was conveyed by the European Union's High Representative for Foreign Policy, Josep Borrell, upon his arrival at the meeting of EU defense ministers via videoconference. In Berlin, German Foreign Minister Annalena Baerbock: "We are all aware that EU membership is not something that can be done in a few months", such a goal "brings with it a deep and intense process of transformation", adding number one in government-led diplomacy by Olaf Scholz. Baerbock then underlined that "Ukraine is part of the European house and the EU has always been a house with open doors, on our side there is no closure". According to Berlin's foreign minister, "besides the European Union there are many institutions that aim to commit to peace and security on the European continent". However, on Tuesday the European Parliament will vote on the status of the EU candidate for Kiev. "Seeking to grant Ukraine candidate status for the EU, in accordance with Article 49 of the Treaty on the European Union and in the meantime, continue to work for its integration into the EU". This is a request contained in a draft resolution to be discussed at a plenary session of the European Parliament held after Russia's invasion of Ukraine. The text, whose vote is expected on the evening of March 1, also condemns "unequivocally Russia's illegal and unjustified military aggression against Ukraine, as well as Belarus' involvement in this aggression".
“When I ran for president, I said that each of us is a President. Because we are all responsible for our country. For our beautiful Ukraine. And now it has happened that each of us is a warrior. A warrior took his place. And I. sure that each of us will win. Glory to Ukraine!" (Volodymyr Zelensky)
Meanwhile, the Ukrainian leader continued to garner support and assistance from allies. This morning before the talks with Moscow he spoke with NATO Secretary General Jens Stoltenberg, a phone call that was followed by a tweet from Alliance number one: "Allies are increasing their support with air defense missiles, anti-train, financial and humanitarian aid". Stoltenberg commented on the "courage of the Ukrainian people and army".
Next Post Previous Post
Political