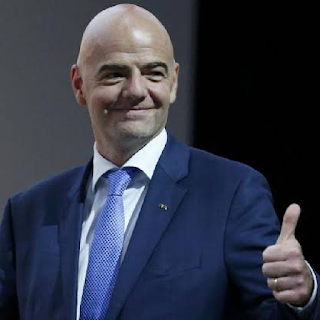 FIFA president Infantino
No international competitions may be played on Russian territory, with 'home' matches being played on neutral grounds and without spectators. Member associations representing Russia will participate under the name 'Russian Football Union (RFU)' and not 'Russia'. "No flag or anthem will be used in matches involving teams from the Russian Football Federation": FIFA has decided. "Fifa - continuing on its record - will continue its dialogue with the IOC, UEFA to determine additional actions or sanctions, including possible exclusion from the competition".
•Poland: FIFA's position is "totally unacceptable"•
FIFA's plan to allow Russia to play international matches at home to neutral venues and under a neutral banner is "completely unacceptable" for Poland and has reiterated that they will not face Russia in the World Cup play-offs. "This decision is totally unacceptable. We are not interested in participating in this match. The Polish national team WILL NOT PLAY against Russia, regardless of the team name", Cezary Kulesza, No. 1 from the Polish Football Association, reacted immediately on Twitter. Poland are expected to face Russia in Moscow on March 24 in the Qatar 2022 World Cup play-offs. Sweden and the Czech Republic have also made it clear that they have no intention of playing with Russia. In fact, the winner of Sweden-Czech Republic had to face the winner between Russia and Poland in the deciding round.
Next Post Previous Post
Football,Sport