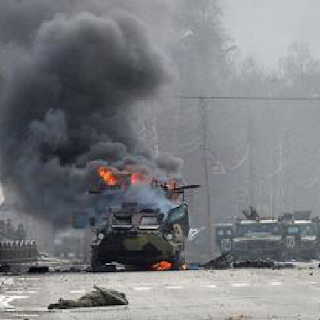 The war had started as a harbinger of the first expected negotiations between Russia and Ukraine, but while the table was still going on, Vladimir Putin froze everyone by placing, on the phone with French President Emmanuel Macron, his conditions for an end to the war. conflict: "It is only possible without conditions taking into account Russia's legitimate interests in the security field, including the recognition of Russian sovereignty over Crimea", "demilitarization and denazification of the Ukrainian state and guarantees of neutral status". Meanwhile, fighting continued on multiple fronts and a hail of Russian missiles on Kharkiv, to the east, made headlines.
•Near Gomel, a Belarusian city about 40 kilometers from the Ukrainian-Russian border, the first round of negotiations took place between a delegation from Kiev, led by Defense Minister Oleksii Reznikov, and one from Moscow led by former Culture Minister Vladimir Medinsky. . Among the mediators was also the Russian oligarch Roman Abramovich. "The main issue is the ceasefire and the withdrawal of Russian troops," said a statement from the Ukrainian presidency. In the afternoon news of the end of the talks circulated, but after about an hour there was confirmation of the resumption of the same thing: it was not clear if it was a break or if the parties returned to the table after the initial black smoke. . The table ends at 18 local (17 Italian), according to the head of the Ukrainian delegation there will be "some progress". A second round of talks is planned.
•Ukrainian President Volodymyr Zelensky today signed a request for the country to join the European Union. Brussels institutions will be prepared to respond immediately, but the day's declaration was marked with caution: for High Representative for Foreign Policy Josep Borrell, membership is not on the agenda for now, and also restrained Germany: "This is not something it can do." done in a few months," said Foreign Secretary Annalena Baerbock.
•The main battle front at the moment is the eastern one in Kharkiv , the country's second most populous city, the capital of the homonymous oblast (region), bordering Donetsk and Luhansk. Many grad missiles have hit residential neighborhoods and according to sources from the Kiev government there were dozens killed and hundreds injured. An attack attempt by Russian special forces was successfully repelled in Kharkiv yesterday.
•Other fronts: around Kiev the situation is deadlocked, the city is almost surrounded by Russian troops but no attack is initiated. Several powerful explosions will be heard shortly before 6pm. The Russian conquest of Mariupol, a port city on the Sea of   Azov, for days under heavy bombardment, seemed to be drawing near: it would be a big point in Moscow's favor, which would have a land corridor between Crimea and the Donbass. The city of Kherson, near the Crimean peninsula, was also under siege. On the Black Sea, Russian and Ukrainian fleets fought for control of the port of Odessa, near Chornomorsk and, further east, from Ochakiv, at the mouth of the Dnieper River.
Next Post Previous Post
Political