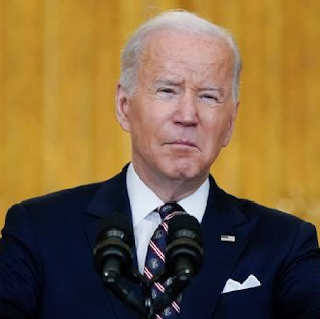 US President Joe Biden
Russia's invasion of Ukraine led to sanctions. Countries such as the United States, Britain, Japan, New Zealand, and others have imposed sanctions against Russia. Most of these countries impose financial and export-import sanctions that can threaten the Russian economy. Previously, Russia had been warned by several countries after recognizing the sovereignty of the Luhanks People's Republic and the Donetsk People's Republic. Putin is also known to have ordered his troops to be in both regions. The following is a list of countries that have imposed sanctions on Russia. What are the forms of sanctions:

Other countries are still holding back from imposing sanctions on Russia

While developed countries have declared sanctions against Russia, many countries have refrained from imposing sanctions. Although the majority of ASEAN countries condemned Russia's invasion of Ukraine, there has been no official statement from each ASEAN member country regarding the imposition of sanctions. India, which is one of Russia's partners in arms cooperation, is also reluctant to follow the path taken by several countries to impose sanctions on Russia. Countries on the African continent are also passive in voicing the current situation in Ukraine. Only South Africa dared to voice a request to Russia to withdraw its troops from Ukraine.

It seems that the sanctions against Russia have widened to various sectors. Most recently, the 2021/2022 Champions League final did not take place at the Gazprom Arena after UEFA moved it to Paris. Gazprom Arena itself is a stadium located in St.Petersburg, Russia. In addition, Poland, Sweden and the Czech Republic also agreed not to play in the 2022 World Cup playoffs in Russia. The round is scheduled to be held at the end of March 2022 if there are no changes. The Czech Republic has also reportedly stopped all flights belonging to Russian companies. The country is also known to be analyzing further plans for financial sanctions against Russian companies.

Britain not only sanctions the Russian government, but also Russian billionaires

The UK has imposed sanctions on five Russian banks in the UK. The five banks that were sanctioned were Rossiya Bank, IS Bank, General Bank, Promsvyazbank and Black Sea Bank. Not only that, Britain also imposed sanctions on three Russian billionaires, namely Gennady Timchenko, Boris Rotenberg and Igor Rotenberg, reported by The Guardian. All three are businessmen from Russia who have businesses in England. Boris and Igor Rotenberg are known to own a business called the SGM Group. There is also Timchenko who is the owner of the Volga Group which is engaged in private investment. There is also the airline Aeroflot which is a partner club Manchester United. Aeroflot can no longer operate in the UK until the sanctions are lifted. Chelsea owner, Roman Abramovich, is also rumored to be frozen along with the many pressures by many parties.

Canada has also reportedly imposed sanctions on Russia in conjunction with its invasion of Ukraine. Canada has targeted 62 individuals and entities for sanctions, including Russian banks. In addition, Canada has also canceled all export permits going to Russia. Canadian Prime Minister Justin Trudeau said "these sanctions are far-reaching, they will impose a huge cost on the Russian elite involved", reported Al Jazeera. Canada's cancellation of export permits will have a significant impact on the Russian economy. On the other hand, Canada also said it was ready to accommodate immigrants from Ukraine.

Japan not only sanctions Russia, but also Belarus

Japan is one of the few countries in Asia that has overtly imposed sanctions on Russia. Japan has reportedly imposed financial sanctions as well as a ban on exports to the Russian military. Interestingly, sanctions are not only issued by the Japanese government, but also by companies in that country. According to The Japan Times, Japanese companies are already considering other sanctions against Russia. On the other hand, the Japanese government also imposed sanctions on Belarus which had helped Russia in invading Ukraine. Even so, it has not been further explained what sanctions will be given to Belarus.

The United States Department of the Treasury has instructed banks in the United States not to have relations with Russian banks. There are two banks that have played a vital role in supporting the Russian economy, namely Sberbank and VTB Bank. Both banks are known to do 80 percent of Russian foreign exchange. There are also several other Russian banks that will become victims of the US Treasury's policies, such as Otkritie, Sovcombank and Novikombank. US President Joe Biden also said that the sanctions imposed could burden Russia in the long run. Meanwhile, Biden also emphasized that the sanctions imposed had minimal impact on the United States. Joe Biden has also sanctioned Russian elites and their families. Biden has said he has spoken to G7 members, Canada, France, Germany, Italy, Japan and the UK.

The European Union imposes sanctions on Russia in the financial, energy and trade sectors

The European Union has imposed sanctions on Russia in the areas of finance, energy and transport. The European Union is reported to have imposed export restrictions as well as adding to the blacklist of commodities from Russia. Not only that, the European Union also said it had frozen the assets of Vladimir Putin and Russian Foreign Minister Sergey Lavrov on Friday (25/02/2022), reported by Al Jazeera. "We have hit Putin's power system which must be destroyed, not only economically and financially, but also at the center of his power," said German Foreign Minister Annalena Baerbock. The European Union has also cut ties with the Society for Worldwide Interbank Financial Telecommunication (SWIFT). However, it is not yet known exactly how much impact Russia will have as a result of the sanctions.
Next Post Previous Post
Political